Well, I still don't know what happened to my website but as I had been thinking of making changes anyway this seemed like a good time to do it. I now have a new site at http://www.janeoleary.name and have spent rather too much time today revamping the pages. It all looked perfect on the preview but somehow the layout has slipped around now it is online. More adjustments needed!
Posted by Jane at Sunday, August 31, 2008 2 comments:

This week I have been spending odd bits of time musing over what to do with this piece. The original idea was 48 6 inch blocks, starting with a pink "fish" on a purple background which gradually changed through 4 fabrics. Then the background would change to turquoise and the cycle continue. Halfway down the quilt (ie after 24 blocks) the order would reverse and the final "fish" would eventually be the same as the first one. As there were to be two of each of the blocks, I started making them in pairs so I now have all the purple backgrounds done and a few of the turquoise ones plus 4 transition blocks. The picture below shows them laid out in order - there should be a bigger gap in the middle but the table isn't big enough. 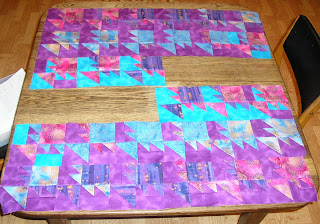 Seeing them like this, I really wasn't happy - it all looked much better on paper! Two problems - firstly the change of background is too abrupt and secondly I don't like the way the fishes look when they are touching on all sides. I spent AGES rearranging, turning the blocks in different directions, trying a chequered effect, but still no good. Finally, I decided to have a rethink and add borders to make attic window blocks. I bought 30cm of two dark fabrics and as everyone was out today, spent some time adding them. The picture shows 2 rows completed. 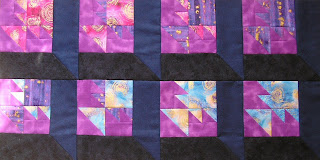 There was a slight hiccup when I realised I have never done a block with mitred corners (memo to self - reading about something is not the same as doing it). My patchwork to date has been just squares and half square triangles but going nice and slow it seems to be working. Of course, adding the borders almost doubles the size so it will be two separate quilts and the transition blocks will be a cushion cover.
Posted by Jane at Saturday, August 30, 2008 No comments:

When I was meant to buying birthday presents last week, I picked up a book called Felted Friends by Sue Pearl (Search Press) and was captivated immediately by the cute animals (I am a big softy on the quiet). Over a couple of days, I sat down with my girls and we made these little fellows using wool tops felted over pipe cleaner skeletons. Details were added by needlefelting - I did this bit for them and have the puncture marks to prove it.

Here they are frolicking in the tomato plants. 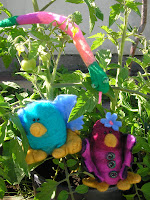 From left to right blue bird by Ellie (9), snake by Katy (11) and pink/purple bird by me (over 21). The children are entering theirs in the village flower show tomorrow so fingers crossed for them. No craft section for grown-ups so I am consoling myself by entering some holiday photos.

I have also been busy booking my tickets to visit the Knitting and Stitching Show in Birmingham - I am going up by train on the Saturday. Making the booking involved lots of swearing; I could only get the cheaper tickets if I was prepared to leave Bristol at 7.15 am and take a little diversion to change trains in South Wales - not the most obvious route to the midlands - and come back very late, so I bit the bullet and got the standard price so I can leave at a more reasonable time. At least I can be sure the visit will be worth it and I would really rather not drive to the NEC.
Posted by Jane at Friday, August 22, 2008 No comments:

I have just found out that my website has mysteriously disappeared - apologies to anyone trying to access it, I am trying to find out what has happened.
Posted by Jane at Wednesday, August 20, 2008 No comments:

A New Blog is Born

I have found a few times recently that I have arty/crafty things I would like to blog about that don't really fit here (although a few have slipped in) - I want to keep this blog for work and ideas related to my coursework - so I am pleased to announce the birth of Quodlibet.

I shall not be getting module three until September so there may be a few weeks before my next entry here. In the back of my mind I know I should be contemplating the next assessment piece, which logically ought to be the one using metallics, but I need some quiet time to think when I am on my own (it's my artistic temperament you know :-)). In the meantime, come and see me at the new blog.
Posted by Jane at Saturday, August 16, 2008 No comments: 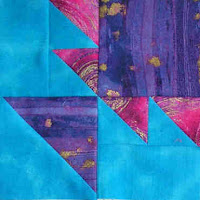 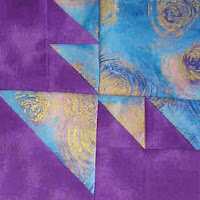 School holidays is the time to fiddle with bits and pieces in the odd quiet moment, and I have been playing with some patchwork. I have made lap quilts for the rest of the family over the last couple of years so this is meant to be one for me. The idea was to use the same block which looks a bit like a fish and cycle through the colours. Now I have completed enough for 1/2 a quilt, I am not so sure it is a good idea. I think I shall perservere and if all else fails I will end up with a dozen cushions. 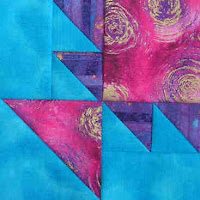 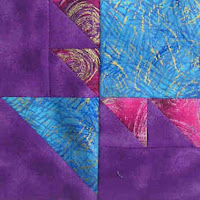