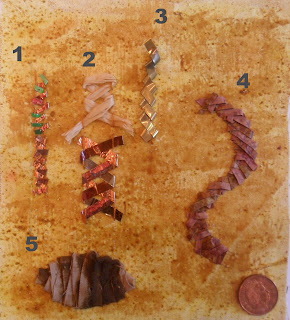 Some samples using quillwork techniques with different materials, mounted on one of the pieces of canvas from chapter 3 painted with gesso, egg tempera and spices (still smells luscious).

I have used little offcuts of metal from earlier coursework as 'quills' in some of these - they were easy to cut and bend but I snagged my fingers on the edges; next time I will wear thimbles.  I also found it was easy to cut the stitches by accident when feeding the strips through. They make interesting patterns with the different colours on front and back.

1 Single 'quill' over 2 lines of stitching, top is tomato puree tube (heated, painted and pierced), bottom is a thin copper shim.
2 Again over two lines of stitching.  Top is single piece of raffia, bottom is a strip of copper shim and one from a drinks can (heated).
3. A single strip over one line of stitching - from a thicker piece of metal.
4. Curved line made over two rows of stitching, this time using both ends of a single strip simultaneously to make the braid (joining strips in as needed).  Strips were cut from one of the envelopes made into leathery surfaces in chapter 3, which has colour on both sides where it has soaked through.  Being crumpled and waxed made the paper strips soft so they bend well, but also made them  prone to being damaged by the threads which caused them to tear.
5. Oval shape using both ends of one strip of dyed fabric, tucking loose ends underneath to join a new piece.  This gives a slightly raised fabric motif with a clearly defined edge which I rather like - much more fun to do than turned edge applique.  I think this would very effective over some padding.
Posted by Jane at Thursday, January 31, 2013 1 comment:

Thinking about found objects as beads – here is a collection of items that could be used.

And some with colour added (acrylic paint and Goldfinger).

Holes cut out before shrinking.  I tried linking the pieces while heating thinking they might join up but they did not stay together (whereas normally when I use shrink plastic it curls up and sticks when I don't want it to).

1,2 and 3 are the shrink plastic shown above.  I think 1 was overheated as the acrylics went crunchy and changed colour – maybe the interference colours aren’t really suited for this technique.  2 is some of the cut out pieces left unchanged and for 3, I stopped before it had entirely shrunk which gave these little shell-like pieces which shine like mother-of-pearl.

My next experiment was with glass paints on white plastic and this time using the oven rather than a heat gun. 4  is little circles again and triangles;  5 is two circles on top of each other, heated for a very short time and pulled out when they started to curl, which gives these shapes like flower heads, with the smaller piece nestling inside (I thought they would stick together but actually the inner pieces are loose).  8 is the same method with the randomly shaped offcuts which twist up rather nicely.

6 and 7 are paper pulp painted with acrylics and Goldfinger.  6 was pulp pressed into the lining from a box of fruit sweets – I forgot to make holes so these ones will need to be couched down or trapped – and 7 is shapes moulded with fingers on a skewer so they can be threaded.  I think these ones look like muddy lumps of fools gold.

Photo 6.6 below – a selection of rolled beads made from scraps of dyed scrim, permanganate dyed bamboo cloth and sheer fabrics bonded together and incised with a stencil cutter.


Photo 6.7 Moving on to using beads, this sampler shows from top left

1.Beads threaded with peyote stitch and found objects added as a trim.
2. Weaving on a bead loom.  I stencilled the little bird shape from chapter 5 using ratio graph paper to get the proportions right for the shape of the beads, but unfortunately I didn’t realise until I had finished that I had the paper the wrong way round, so it is rather long and thin.
3. Netting laid over one of the shrink plastic shapes and backed with  onion dyed silk.  Below it are two tiny samples of different beading stitches.
4. A square woven on the bias with a single length of yarn (pin weaving)  strung with shrink plastic beads.

These four samples are mounted on one of the dyed pieces from chapter 3.
And some close-ups
Finally, paper pulp beads placed on a  Tyvek background and held down with strings of bought beads.
Looks a bit like a rocky desert scene.

One last bird picture from chapter 4 to complete the set, then onto chapter 5.

The design exercise in this chapter is all about creating a totem from a collection of any relevant items as a way of celebrating my personal course theme, which is ‘machinery and industrial landscape’ .  The chapter suggests it could be in the form of a heap of things or a memory ribbon.
After much thought, I decided to use my collection of photographs of the old Sevalco plant near where I live.  This was one of the first things I photographed when exploring the theme back in module one, and I have returned several times over the last few years as the plant has been  taken down piece by piece. The latest set was taken just before summer school 2012 and now there is little left of many of the structures apart from large piles of bricks and some puddles.  I didn’t base any of my assessment pieces on these images but they have cropped up several times as inspiration in the coursework.  As I am getting to the final few chapters,  I like the idea of celebrating both the theme and the passage of time since I started the course, and all the changes that have taken place.

I wasn’t sure at first how to present the photographs but I wanted to express the idea of there being little left but rubble.  I remembered seeing this blog post a couple of years ago featuring sculptural photography by Szymon Roginski and Kasia Korzeniecka, and I have taken this as inspiration.  The photographs have been cut up, folded into octahedrons and loosely bound together with copper wire so the heap can be rearranged and piled up.

The next step was using this as a source for two-dimensional designs.  Throughout the process, I referred back to the list at the end of my last post as inspiration for the style and I have occasionally noted this in brackets so you can see what I was thinking.

Photos 5.4 and 5.5 show the first attempt using the idea of symbols in a graphic style (like signs).  I copied some of the faces of the octahedrons and simplified the images so that a few lines represent e.g. pipe ends and scaffolding, roof spotlights, chimneys, barbed wire.  I chose four of these and drew them into a larger (A3) plan for an octahedron (working with grids and symmetry).  After this, I wasn’t sure what to do with it – you can see I played a bit with overlaying onto one of the original photos to add colour.

I decided to try a different tack.  This time I worked in Paint Shop Pro to draw up a grid based on one of my pylon photos.  The shapes are the spaces between girders and the basic unit has been mirrored and flipped to make a symmetrical grid. Photo 5.6.

To use this with my photos, I applied the posterise effect to one of them to reduce the detail and overlaid the grid so you see fragments of the image with only a few parts recognisable, as you do with the ‘heap of rubble’.  Photo 5.7 .
Then I realised it would be much more interesting to bring in the multiple viewpoints, so I printed the grid and cut up some of the photos, sticking them in the spaces. I included several shots of the same buildings, taken from different angles and on different days Photo 5.8

I scanned this into Paint Shop Pro and used the displacement map option to distort the image so it doesn’t just look like cut up photos. Photo 5.9.  (For some reason this looks better printed out as it is a much richer blue).

And then tried a few colourways, photos 5.10 to 5.12, but prefer the background in rust/terracotta.


Changing the settings for the displacement map created an abstract image with a soft felt-like texture (could be hidden stories) photo 5.13.
I intended to print this image at A4 for my folder but forgot to check the last printer settings used, which happened to be for a poster, so the result was that it printed out large scale sections on postcard sized photo paper.  However, it was a happy accident as I rather like some of the sections, and in close up they look like handstitched panels. Photos 5.14 and 5.15.
Finally, wanting to move away from the rectangular boundaries, I came full circle.  Photo 5.16  these are large scale prints of 3 of the sections from  photo 5.13 (2p coin for scale, they are on two A3 sheets) which seem completely abstract but carry a lot of information from the theme.   The colours will need adjusting as the computer manipulations often produce odd combinations and not enough contrast between light and dark areas, but I can see these being made in needlefelt or a combination of felt and fabric as freestanding forms.